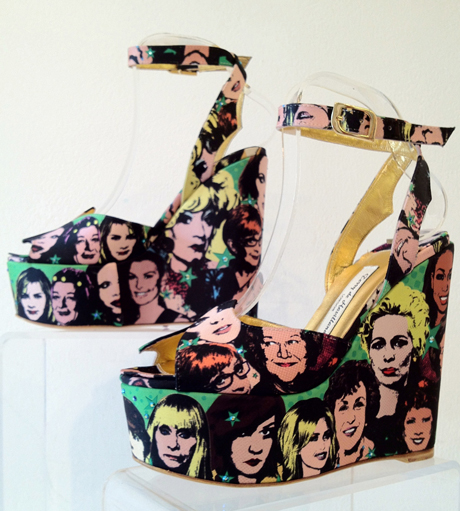 Dubbed “the rock and roll” cobbler, Terry de Havilland has been designing eye catching footwear since the end of the 50s having learnt the art of shoemaking from his parents who made show shoes for the Windmill Girls during the second world war.

He first rose to fame in the 1970s when he opened his infamous “Cobblers to the World” shop on the Kings Road attracting a diverse clientele including Bianca Jagger, David & Angie Bowie, Jackie Onassis, Vivienne Westwood and Rudolph Nureyev. He worked with luminaries including Zandra Rhodes and Ozzie Clarke and designed Tim Curry’s shoes for the Rocky Horror Show.

As well as producing his ready to wear collections de Havilland also creates custom made one off pieces from his studio in London’s East End. His current day customers include Kate Moss, Sienna Miller, Naomi Campbell and Alison Goldfrapp.

100% from the sale of these shoes will be going to Claire House. Happy bidding!