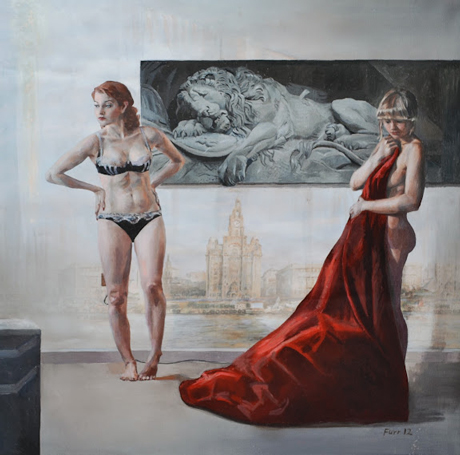 Painter and portrait artist, Christian Furr was born in Heswall, Wirral in 1966. He became the youngest artist to have ever officially painted Queen Elizabeth II, when in 1995 – at the age of twenty eight – he was invited by the Queen to paint her portrait at Buckingham Palace. The work was commissioned by and hangs at the Royal Overseas League, St James, London.

Art work from Furr features in a floor at 45 Park Lane – the third hotel in the UK from the Dorchester Collection, which opened in London at the end of October 2011.

He has been asked to paint many people internationally including a portrait of the late HRH Crown Prince Bin Abdul Aziz Al Saud, Cardinal Cormac Murphy-O’Connor for Westminster Cathedral and Tim Henman (for Robinsons). He is currently painting the American Burlesque star Dita Von Teese.

Christian has appeared on several television shows judging and teaching Art and written a book, entitled ‘Take Art’.
In June 2004 the artist collected an AoC Gold Award at the House Of Commons, given to further education college alumni who have gone on to achieve excellence in their chosen field. Former winners include Jamie Oliver, Betty Boothroyd and Jimmy Choo.