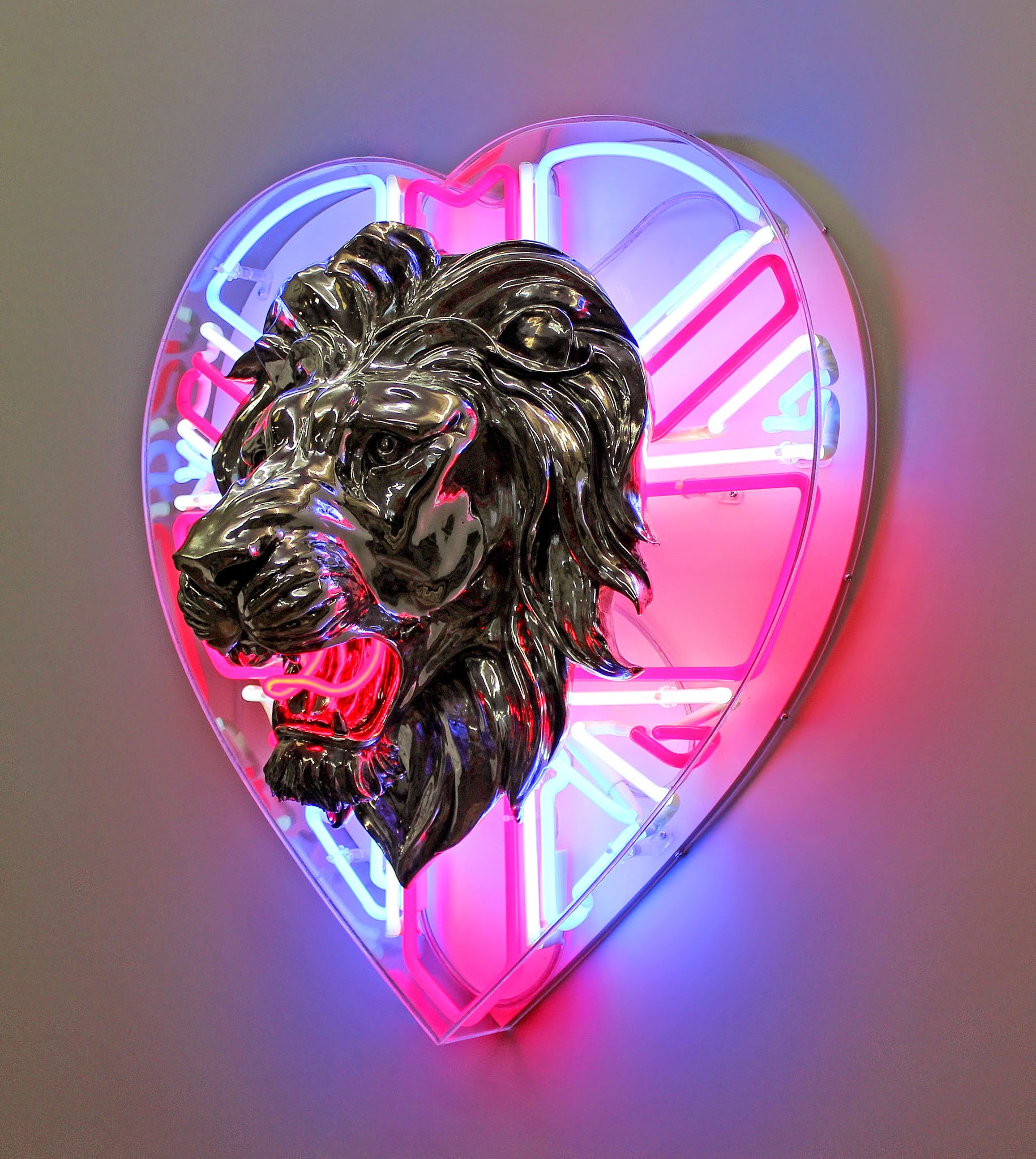 Christian Furr says ‘ I visited a castle. Its façade showed an antique carved relief of a lion. Because of this relief, the tower was also called “the Lion Tower”. Above this lion, you could see the coat of arms of king Henry IV of England and in the tower itself  mounted stuffed lions heads are on the walls, hanging high.

We didnt want use ‘stuffed’ – Bad Feng Shui. . We have taken the lion symbol of the crusaders and given it a modern twist. In the past a mounted animals head would be displayed as a trophy. A symbol of the hunters power but this piece is different.
It’s about personal strength of heart ‘Lionhearted’ and it’s about love not war.’
The shield, the symbol of defence and war has become a heart and has been electrified in neon.’

It’s  about Art,  Rock n Roll and the uncontrollable id which is hinted at in the almost animated  tongue. In a shamanic state we speak in tongues. The tongue is used for speech and pleasure and here it is highlighted in neon. A powerful icon for the 21st Century

It’s about the will to survive. It’s about Muddy Waters ‘tiger in your tank’. Irrepressible and mesmerising as neon itself. This piece celebrates the medium and the message.

About the artists
Chris Bracey
Born London in 1954. Started work in an Art Studio in Soho but his love of neon and all things bright drew him to work on fairground, circus and amusement neon graphics and design. 30 years later his talent was discovered by the Guy Hepner Gallery in LA and work sold throughout the world.
Chris has undertaken some impressive commissions for Selfridges, (working with David la Chapelle), Agent Provocateur, Alexander McQueen, Stanley Kubrick, Tim Burton, Vivienne Westwood, Joe Corri, Harrods, Burberry, Mulberry, Da Da Dandy, Stella McCartney and numerous film and TV projects. Many artworks have been sold at Phillips de Pury London / New York and Sotheby’s London.
With the five neons on display at LCAF14 British artists, Chris Bracey and Christian Furr explore the medium of Neon in reclaimed, neon objects.
Collectively, those who own pieces of their works include, Queen Elizabeth II, Sadie Frost, Jude Law, Tarrie Lister Havlin, David LaChapelle, Stella McCartney, Martin Creed, Michael Caine, Jerry Hall, Vic Reeves and Vivienne Westwood.
Chris Bracey has been the ‘Neon Man’ for 37 years creating iconic art pieces for everyone from David LaChapelle to Martin Creed. Chris has made, installed and collected signs that have appeared behind some of the greatest stars including Tom Cruise in Eyes Wide Shut, Johnny Depp in Charlie and the Chocolate Factory and Jack Nicholson in Batman. Chris salvages old neons and architectural advertising from the streets before they disappear forever.
Liverpool Love Curator -Christian Furr became the youngest artist to have ever officially painted Her Royal Highness Queen Elizabeth II, at the age of twenty-eight. The painting was commissioned by the Royal Overseas League, St James’s London.

Thomas Doran – 1984
Jay Batlle – Everything Must Go
Share this artwork 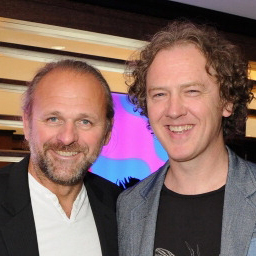