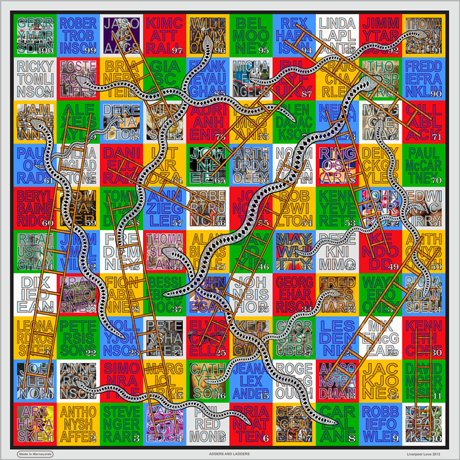 Born in 1945 in Brighton Brad Faine studied painting and printmaking at Leicester College of Art and at Goldsmiths College. He then taught printmaking part-time at Farnham College of Art and St. Martin’s School of Art as well as lecturing at numerous colleges before setting up his own screenprinting studio in 1973 (Coriander Studio).

Brad Faine’s early studies centred on an interest in conceptual art and later developed towards a concentration on colour field painting. While a student at Leciester he met Sydney Harry whose research into colour phenomena attracted his attention and for many years his work was concerned with the study of the qualities of colour and form without reference to natural objects. His interest in printmaking was motivated by a desire to make multiple flat colour images for which screen process printing was ideally sutied.

He found the hard edge image too restricting and for this reason he developed a form of continuous tone printing within the limitations of the medium. Faine’s recent work is focussed on multi-layers of meaning and imagery within a grid format; giving the viewer a wealth of visual information to absorb. Often in response to current affairs Faine’s works are witty and comic visual conundrums. Faine founded Coriander Studio in 1973 and has worked with many internationally recognised artists to create exciting silkscreen and digital editions. Brad Faine has also designed and produced a number of games which have been exhibited. He has undertaken painting commissions and his work has been exhibited in many group shows and is in many private collections.