Adrian Henri was born in Birkenhead in 1932. He studied Fine Art at King’s College, Newcastle under Victor Pasmore and Richard Hamilton. A former fairground worker, teacher and scenic artist, he settled in Liverpool in 1957 and taught at the Art College. He first came to prominence as a poet alongside Roger McGough and Brian Patten in the groundbreaking 1967 Penguin anthology, The Mersey Sound and like his paintings, his poems were Pop and popular, irreverent, humorous, political, surrealistic and anchored in contemporary urban culture.Freelance from 1967, he carried on painting, writing and taking part in Happenings while fronting the unlikely poetry-and-rock band, Liverpool Scene and prompting John Peel to describe him as ‘‘one of the great non-singers of our time’’. Though better-known as a poet and performer, he remained a prolific artist until his death in 2000, exhibiting widely, nationally and internationally. His subject matter encompassed Pop compositions, Meat and Salad paintings, semi-abstract depictions of Liverpool FC’s Kop, pastoral English hedges, and foreign locations – a luxuriant Hollywood hillside, the red-rose city of Petra, eerie oysterbeds in Brittany or the Postman Ferdinand Cheval’s extraordinary folly in Hauterives.
Recent exhibitions have focused on Adrian Henri’s urban imagery and have included his 1960’s paintings, drawings and collages, which drew on popular icons, consumer products and cityscapes, while the darkness of his Bird Dying in the City series is
counterbalanced by the ridiculous autocratic figure of Alfred Jarry’s Père Ubu. The City is also the stage for dream-like visions, as in Macy’s Thanksgiving Day Parade or in the Day of the Dead – in this late series, Henri revisited his own 1964 Entry of Christ into Liverpool, relocating the Mexican celebration to Hope Street, with the city’s Catholic Cathedral as backdrop and a cast of absent friends and heroes (Burroughs, Ginsberg, Khalo, Malcolm Lowry, etc.) carousing with Posada’s Calaveras.
Catherine Marcangeli, 2011 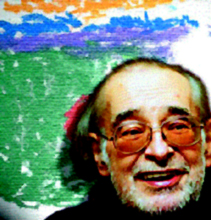